When Cyberhomes required a studio quality audio solution to install in a music industry mogul’s media room, the team turned to Meridian Audio.

Utilising a range of Meridian in-room, in-wall and in-ceiling loudspeakers and subwoofers, the Thame-based technology integrator has delivered a media room that meets the client’s requirement of performance and aesthetics.

The client brief was to re-design an existing media room into a space for critical music listening and to enjoy movies, music and gaming. It was important to the client for Cyberhomes to utilise products that would offer a high standard of audio and video quality, whilst also providing a room that is visually interesting, with a balance between functional and discreet, and comfortable and relaxing. He also wanted the team to implement an alternative design to the more common stretched fabric look that many media rooms feature. 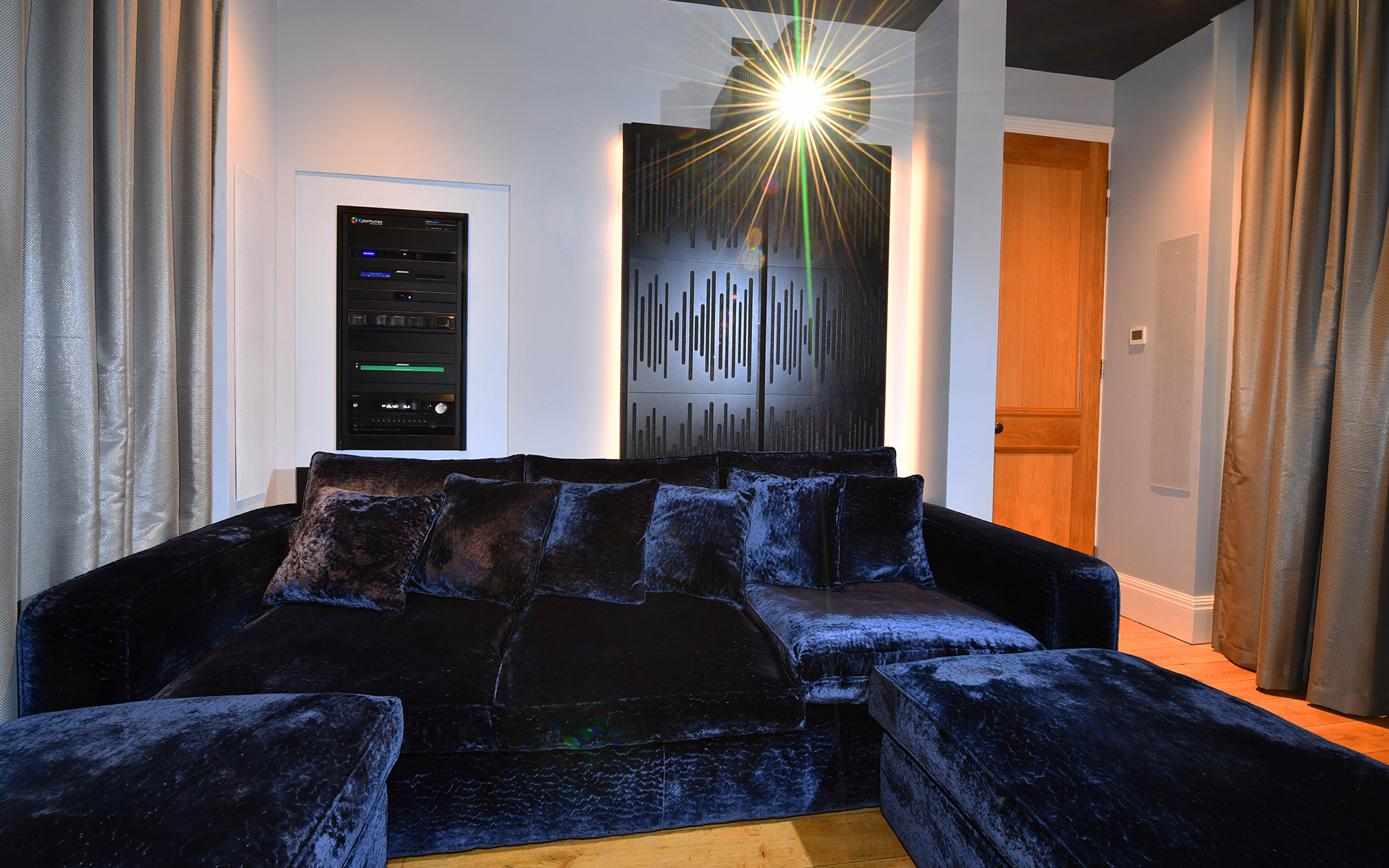 This project presented Cyberhomes with a number of challenges. The room featured existing joinery built into the front wall, which reduced the room dimensions significantly. To obtain the desired look whilst maximising the performance, Cyberhomes used CAD, mood boards and 3D visuals to develope several design concepts and demonstrate that by removing the existing joinery, stripping back the walls and restructuring the ceiling, they would be able to transform the room and achieve the best possible results.

The compact size of the room also presented acoustic issues, including potential bass boom from room modes and first order reflections from the hard walls, while a large window to the right of the proposed projector screen position.

For bass control, Cyberhomes installed several corner bass traps at the front of the room, which contributed to the functional and studio look of the room. A black out blind in the window reveal was required to control ambient light, with a semi-transparent curtain in front of it to deal with audio reflections. This curtain was mirrored on the opposite side wall to balance both looks and acoustics.

With the audio and video needing to support the latest AV formats with full high definition playback of both music and movies, and the aesthetic and functional design being equally important, it became apparent that using Meridian Audio’s sophisticated digital technology and iconic speaker designs would allow Cyberhomes to meet the client’s expectations and achieve a Dolby Atmos 5.2.4 configuration.

A pair of Meridian DSP7200SE loudspeakers finished in the client’s preferred custom select colour of RAL 5025 – Pearl Genitian Blue were installed on either side of an acoustically transparent projector screen, providing the left and right channels for surround sound content as well as being able to play stereo music at sample frequencies up to 352 kHz in the latest MQA high-resolution format. Containing four powerful, integrated 150W amplifiers, the DSP7200SE loudspeakers eliminate the need for an amplifier in the rack, reducing power and thermal management requirements. A sonically matching DSP5200SE HC centre speaker was installed behind the screen. The DSP5200SE HC speaker provides full range playback in a horizontal centre-channel package. Meridian’s unique Centre Elevation technology allows the speaker to be placed below the screen while having its sound image match perfectly with the on-screen action, creating an immersive movie experience.

The audio is complemented by a laser projector and an acoustically transparent screen. The integrator built a storage unit directly below the screen, to house the games consoles. To fulfil the visual and functional aesthetic of the room, Cyberhomes selected acoustic treatments that offer a distinctive and stylish feel and allows the room to sound at its best. The acoustic panels were complemented with LED lighting.

Delivering on the client’s request to house the cinema AV components within the room, Cyberhomes installed a pull out and rotate racking system flushed into the back wall, which provided easy access to the back of the rack for future servicing.

A room is exactly as the client requested. He commented: “Cyberhomes exceeded my expectations and have provided me the perfect media room for critical music listening, watching movies and music videos and the best possible gaming experience.” "Cyberhomes exceeded my expectations and have provided me the perfect media room for critical music listening, watching movies and music videos and the best possible gaming experience."

The website uses cookies, which are text files placed on your computer. Some of these are essential to the site's operation while others analyse how visitors use the site. These cookies are set by default but you can disable them or view more information about how they are used here. By clicking on I accept you consent to our use of cookies. Cookie Policy